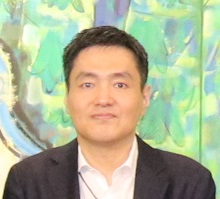 Prior to the role, Taka held management roles in APAC countries at Terumo subsidiaries.

Taka holds BA in Literature and Linguistics from Kyoto University.